Check out this before and after x ray that proves we can straighten your bunion!

Meet Andriany (56) with a common case of bunions (big toe turned inwards). Frighted by the idea of her bunions getting worse, painful surgery, adjusting her footwear to accommodate the deviation of her joint, she decided to get some advice about her further developing big toe problem.

Andriany was surprised to hear that we could actually straighten her big toe without affecting her busy lifestyle and footwear choices.

After establishing Andriany’s personal goals, we completed an advanced joint assessment during the initial consult which also included an x-ray. A course of Foot Mobilisation Therapy was prescribed, which is a series of gentle mobilisations and manipulations to the joints in the feet. Specific foot exercises are then given to strengthen and support the changes made.

Full credit to Andriany’s commitment to treatment as the initial stage of treatment was the most intense with minimal ongoing treatment thereafter.

This is Andriany’s initial x-ray, as you can see below her initial bunion angle was 34 degrees which is classified as an advanced bunion, where a normal angle is between 12-15 degrees.

As you can see a significant change of 14 degrees has been achieved! With minimal ongoing treatment we would expect the toe to further straighten till it’s anatomically straight.

Well done Andriany! If you have a bunion and want to avoid surgery, call today on 079250269

We can show you why FMT is right for you

"I only wish I had found you sooner!"

Finally, a Podiatry solution to fix your aching body. FMT is a extremly effective alternative to expensive surgery and orthotics. You can also wear the shoes you want! 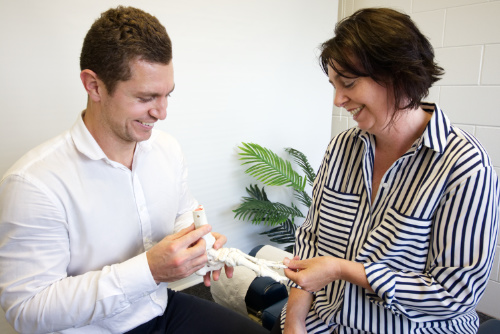 Get your foot pain under control

I have no pain in my calves or feet and I can now wear my ballets flats and high heels with no pain!.

I've noticed a significant change in my bunions. My feet feel a lot more free!.

See what our client have to say

I'm so relieved that I did the treatment because I was told, surgery was my only option for my feet.

For the first time my feet are pain free, I don't wear orthotics anymore and my bunions feel and look great! Highly recommend!.